For our Bake Shop Party I knew I wanted a faux awning to create a store front look. I had seen several things on pinterest that either involved screwing brackets into my walls or a full free standing frame. These were both not option. I told my dad my dilemma and he came up with this PVC pipe creation. This is not as much of a tutorial as images of behind the scenes. Unfortunately I cannot really give step by step on how it goes together. But here it goes...
A trip to Home Depot for some pipes and angle connectors and I was not convinced it was going to make anything. haha! Well as long as I had anything to do with it. Luckily my dad knew just what it would look like. 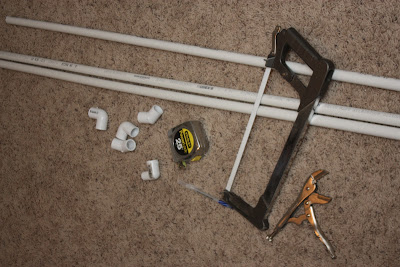 A few minutes later it looked like this. Basically he created a rectangle that sat against the wall. We used the tv to keep it upright rather than brackets. If you don't have a wall mounted tv you could use a metal strip and a few screws to hold it to the wall. ﻿ 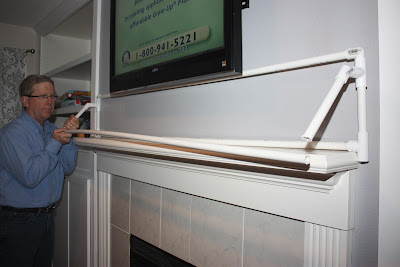 Off the rectangle he created these arms to give the awning the angle in front. We ran a pipe along the front to support the fabric. ﻿ 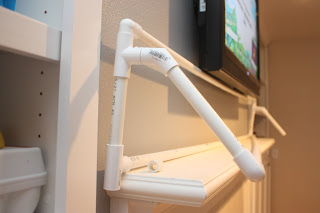 I took a basic rectangle and a friend hemmed the front edge. She sewed a few ties underneath to tie to the pipes. The fabric is draped over the top of the pipe against the wall and just draped over the front. PVC pipes and fabric and VOILA!﻿ 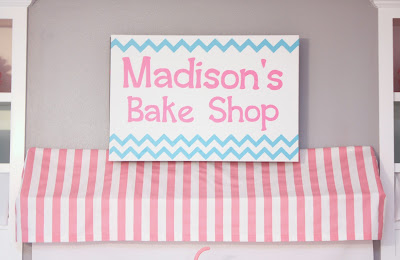 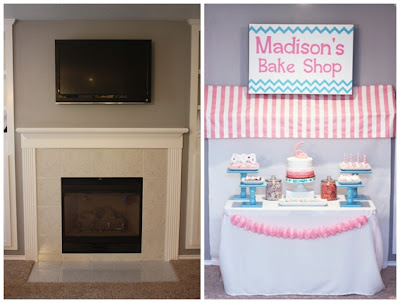 See my previous posts for more Bake Shop Party photos.
And my etsy store for the printable party line and decor.
Posted by Melissa (5M Creations) at 8:00 AM